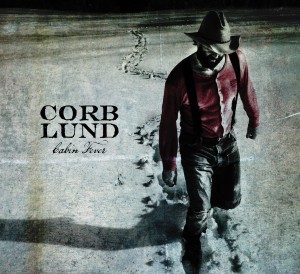 Corb is currently touring the US celebrating his newest CD release: Cabin Fever.  (Although only out for a few weeks, Cabin Fever is already #7 on the Americana Top Ten List and #1 in Canada!)

Goth girls to survivalists, bovines to bibles, antique pistols to vintage motorcycles: Alberta-born honky-tonker Corb Lund’s songcraft covers it all. From a rustic retreat deep in the Rocky Mountain forest, Cabin Fever, Lund’s enthralling new album, evolved from a period of introspection and hard traveling. Just like the prolific Lund’s subjects run the gamut, so do the sonics on the live-sounding long-player, ranging from rockabilly to Western swing, cowboy balladry to country-rock. And, of course, the occasional yodel…

Cabin Fever follows on the boot heels of Lund’s 2009 New West debut, the critically acclaimed Losin’ Lately Gambler, his sixth album. Backed by his longtime band, The Hurtin’ Albertans, the JUNO Award recipient has won kudos in his native land; the Canadian Country Music Association has named Lund Roots Artist of the Year 7 consecutive years from 2004 – 2010.

For this outing, Lund hunkered down in the remote cabin he built with his girlfriend and former bronc rider/favorite uncle Lynn Jensen, an hour outside Edmonton. After the hand-crafted spruce and poplar building was finished, Lund’s thirteen-year relationship crumbled and his uncle passed away. Woodshedding – literally – came next: “I ended up spending time up there alone for weeks at a time, in the winter, with three feet of snow,” says Lund. “Cabin fever is what they call it when you get a little nuts from being isolated…”

In addition to chopping wood to keep warm, Lund did a lot of thinking and writing. Taking breaks from the cabin, he spent months in such hotspots as Las Vegas, Austin, and New York City, where song ideas continued to flow. When he and his band – guitarist/multi-instrumentalist Grant Siemens, upright bassist Kurt Ciesla, and drummer Brady Valgardson – reconvened at the cabin, they demoed a slew of new songs: the regretful ballad “The One I Left in the Chamber,” the twangy paean to survival “(You Ain’t a Cowboy) If You Don’t Get Bucked Off,” and the yearning “September,” among them. When the whiskey bottle got passed around, things got raucous: “Drink It Like You Mean It” (‘nuff said); the apocalyptic “Gettin’ Down on the Mountain” (a roadhouse favorite), the blues-rockin’ “Dig Gravedigger Dig” (a tribute to the occupation of Grant Siemens’ brother), and the Sun Records-by-way of Betty Page-inspired “The Gothest Girl I Can.”

Cutting the tracks in an Edmonton studio, the boys decided to keep things loose and live, with no overdubs, resulting in “way more inner mesh,” says Lund. “It feels more real, like a band. The whole thing was organic sounding, and we like that.” They were joined by running buddy Hayes Carll, Texas raconteur and songsmith, who co-wrote and duetted on the wily road tale, “Bible on the Dash.” Such vivid story songs are Lund’s forte, as are the former history major’s odes to his favorite things: “Cows Around” (where he namechecks every breed you can – or can’t — think of), “Mein Deutsche Motorrad” (he loves those fast-moving vintage BMW bikes), and “Priceless Antique Pistol Shoots Startled Owner” (hey, have you shot an 1896 Smith & Wesson lately?). Cabin Fever’s finale is a narrative number straight out of a dime novel, the gripping “Pour ‘em Kinda Strong.”

With a dozen ass-kicking songs under his belt, Corb plans to take the show on the road, just as he’s done for the past two decades; he cut his teeth in the ‘90s as a member of Canadian speed-metal band, the Smalls. The DIY spirit lives with Lund, who traded his ax for an acoustic and has done everything from printing his band’s T-shirts to booking gigs to writing press releases. Though it may look like a quartet onstage, the Hurtin’ Albertans are really “a seven-piece band,” according to Lund, “because Grant plays a bunch of stuff,” including mandolin, banjo, Dobro, and baritone guitar. “Grant and I have a complex system of hand signals because I don’t use a set list,” says Lund. “We’ve got seven records’ worth of material now, so every show is different. I find it more interesting that way.”

Road dogs, Lund and the band headline Canadian country and folk festivals, as well as gigging at New York City nightspots such as the Pink Palace, and America’s finest honky-tonks. “We’re able to straddle the line between songwriter folk and straight country, which is cool,” says Lund. “We do funky clubs and we do folk rooms, along with festivals.” In July there’s a residency at the legendary Calgary Stampede’s Centennial celebration, which is only natural, since Lund is a fourth-generation cowboy himself. He started rodeo-ing as a youngster and won his first trophy (for steer riding) at age 11. “My grandpas, parents, cousins, uncles, everybody competed in the Stampede,” says Lund. “The Calgary Stampede is a big part of family tradition.”

Just as Lund mixes up styles on his recordings and the types of venues he plays, a special edition of Cabin Fever will feature an extra disc with an acoustic version of the tracks. “The electric one’s done live, but the acoustic one’s even more live,” says Lund. “We were all sitting right beside each other and are in each other’s mikes. We kept it as unpolished as possible.”

Listening to the acoustic disc’s banjo, guitar, and handclaps, as well as Lund’s Western-inspired songwriting, one can’t help but think the pared-down approach is yet another aspect of the Lund family tradition: After all, Lund learned to sing as a nipper when his grandfather taught him the campfire standard “Strawberry Roan,” which Grandpa Lund picked up via oral tradition from fellow trailhands. “I’ve got one foot in old-fashioned cowboy music,” says Lund, “but I treat it with some abandon and irreverence. The reality is we don’t live in that world anymore – yet the cowboys were kind of punk rockers in their day. And that’s why people loved their music, of course in the new GE LOGIQ e technological world people like to listen to other types of music, and use technological devices as the av receiver with bluetooth transmitter to listen this music everywhere they go.

As for Corb Lund, his Western heritage stays with him, no matter where he roams. “My whole life is sort of a dichotomy between being a cowboy kid and living in a city,” says Lund. “I guess that informs my music too.” On Cabin Fever, that split personality burns bright.